I want what every mom wants, for their child to be able to do anything they want without feeling scared or alienated in any way.

Ever since I moved to Oswego, most of the guys I have met get their hair cut at the same barbershop, The Good Guys Barbershop.  My husband goes there, and so do all his friends.  If I ask my husband if he knows someone, he might say “oh yeah, I met that guy at the barbershop.”  It’s a ritual for these guys, and they love it.  They take some time to take care of themselves, and feel good afterward.

Today, my boy went to the barbershop and got his first haircut.

What I have learned about anxiety is that it is hard to put into words the reason that you are feeling it when it is happening.  This morning, I was a nervous wreck and I didn’t know why.  I assumed that it was because I watched The Handmaids Tale season finale at 6am when Nicholas had his bottle. If you watch that show, you know what I’m talking about…

The real reason, that I only figured out after the haircut, is that I was nervous about putting Nicholas in a new environment.  What if he screamed and was forever terrified to get his haircut?  What if he couldn’t stand the sound of the clippers?  What if I had to be that mom with a screaming baby in one of the only places that guys go to get away from screaming babies!?

We got in there and waited for our turn.  It was getting closer and closer to the time that Nicholas usually eats, and I did not want any other factors that would make him uncomfortable.  I started taking some “before” pictures to distract him (well, to distract myself).

Check out those long locks…

When it was finally Nicholas’ turn, Keith, the owner of the barbershop, introduced himself to Nicholas first to make him feel comfortable.  Nice touch, I thought. 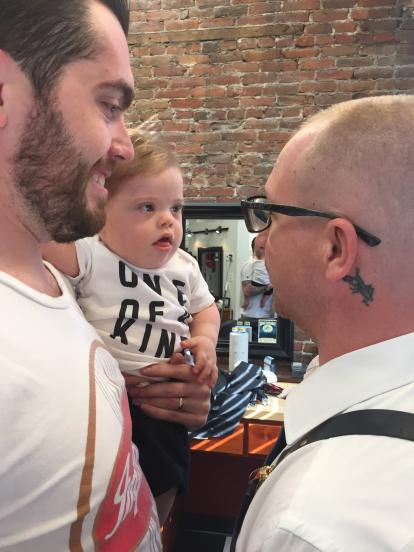 Then, both Nicks took to the barber chair and got to work!  Nicholas did such an awesome job.  He wasn’t scared at all, other than giving the occasional “where the hell am I?” face. 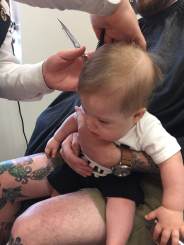 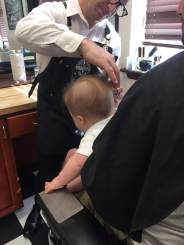 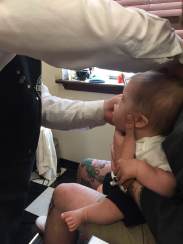 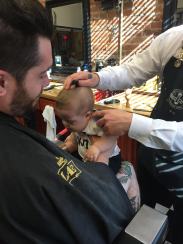 He even tolerated the clippers at the end!

The reason that this means so much to me is because Nicholas was doing something that all of the other guys do.  There was no conversation around Down syndrome, and there didn’t need to be.  Nicholas was just a boy who needed a haircut.

We talked to another man in the waiting area about kids, because he had grandkids, but Down syndrome didn’t come up.  He talked about his grandkid’s sleeping habits, the funny things they get into, but not about their development in comparison to Nicholas’ in any way.  This is a big deal, because I usually need to talk developmental differences with other people I meet.

Don’t misunderstand me here, I am not afraid to talk about it in any way anymore, or I probably wouldn’t have this blog.  I would have liked to talk about it if that man asked me a question.  It was just nice to have a second where my son was just having a new experience doing something that his dad and all of his friends do.  It wasn’t about celebrating that he was doing something despite having Down syndrome, it was about celebrating something because it is just a new experience, and a big milestone!

If you look closely, you can see my big dorky-mom-smile in the mirror, because I was just so relieved.

If you guys live in the area, you have to go to The Good Guys Barbershop, located within Canal Commons.  It’s such an awesome environment, and you can tell that the barbers all really love what they do.  I am so happy that Nicholas is their newest, and possibly their cutest, client.

I know that the mommy-stress is never going to go away, but I need to take a page out of my son’s book and just relax.  He is his father’s son, so he is as social and brave as they come.

2 thoughts on “This haircut meant more to me than I thought it would.”