Two days ago, my husband, his parents, brother, Nicholas and I went to the mall to do a little shopping for our vacation.  Whenever we go shopping, we always joke that my husband is not allowed to talk to anyone because he will make best friends with them and we will be standing around for hours.  He is very approachable, and loves to talk to people.  So, when he was approached by a stranger while holding Nicholas, none of us were surprised.

Little did we know that conversation would leave us feeling a little sick.

Nick was carrying Nicholas, who had just enough of his car seat and wanted to hang out with the grown-ups.  Nick was walking around, bopping Nicholas up and down, when he was approached by a man who had two teenage sons with him.  He had a thick southern accent, a camouflage hat, and socks that went halfway up his shins.

He was talking to Nick, and I could see that he was admiring Nicholas, but by the time I came within earshot of them I heard him say: “I knew as soon as I walked by that he was a Downs baby.”

Alright, I can let this slide.  One of the sons he had with him had autism, and he had already referred to him as “an autistic”.  For those of you who have not studied special education, we try not to refer to children by their abilities alone because that indicates that their abilities are all that they are.  My son is not a “Downs baby,” he is a baby with Down syndrome.  His son is not “autistic,” he is a boy with autism.

So, seeing that he didn’t know that proper term for his own child, I thought in my head “okay, he means well, I’ll let him soak in Nicholas’ cuteness for another minute then we are out of here.”

But no, the ignorance did not stop there.

“I know that Downs people only live to be about 42, or even in their thirties, but I will tell you there is an older Downs man that I always see at McDonalds and I always say ‘hello how are you’ and he always says ‘I’m good how about you’ and he is just the nicest guy.  He is always happy and having a great time.”

Did this guy just give my child and expiration date?

Could you imagine walking up to a family with a baby and estimating their baby’s life expectancy?

Could you imagine if my son was of an understanding age and he heard someone say that he will only live to be 42?

Gone was my polite face. I am not going to pretend to be the politest special needs mommy who can endure things like this easily for the sake of this blog.  I am not, and in my head, I was thinking “your life span is shortening with each word you say, guy.”

Something about him telling me how long my child was going to live filled me with rage.

So, he basically told us that even though this guy he sees at McDonalds has Down Syndrome, he is still able to properly respond to “how are you doing”.  Was this supposed to make us feel good?  Is that all that he expects from that man?

We were bouncing Nicholas around the mall with shopping bags filled with new clothes and toys for him.  I don’t think we looked like we needed someone to make us feel better about our son, who was smiling non-stop.

At this point, after attempting to get his father away from us, the embarrassed typical son took his brother and got out of there.  He was of high school age.  I wondered after if he knew better etiquette from school and his father’s words were killing him, or if he just had normal teenage embarrassment of his father.

The care for people with Down syndrome has dramatically improved throughout the years. His information is extremely inaccurate.  I regret not educating this man.  I was so filled with rage, and as a school teacher I am all about not saying anything at all if you can’t say anything nice.  I was far too mad to address the inaccuracies of his comments, and I didn’t even know where to start!  I usually need a lot of time to reflect before I address things like this.  I am going to have to learn to speed up my reaction time if I am going to help Nicholas out at all.

Ever since I became a teacher, especially since doing all this research on trauma-informed classrooms, I have seen the adults around me in a very different light.  To me, everyone I meet is a child who is carrying some sort of trauma.  Even the people in my life that I see regularly, I will relate the research to them and wonder what they are carrying around with them on a day to day basis, and how it informs their actions.

As mad as I want to be at this guy, my heart hurts for him.  He wanted to connect with us about being a fellow parent of a special needs child, but he just didn’t have the preparation, education, or social appropriateness to do so.  In his defense, as uninformed as he was to approach me at all, I was equally ill-equipped to handle it.  I looked at him and saw a man who just needed some help, but meant well.

He might not be in a situation where he can completely immerse himself in special needs advocacy like I can.  He might not have the resources to learn as much as he can about his own son.  I could also tell that he immediately regretted saying the life span thing once he saw my face.

What was going through my head at the time was the incident that I wrote about in an earlier post, where I saw another family who had a child with Down syndrome and so badly wanted to reach out and tell them that I was on their team.

However, if the goal is to treat children with different abilities the same as other children, then I decided that I probably should not approach them at all unless the situation calls for it.  Otherwise, I might offend someone as this man offended me by saying “hey I noticed right away that’s a Downs baby.” Of course, I would never say it like that man did.  I am just pointing out that, as a fellow parent of a special needs child, I can sort of see why he wanted to approach us in the first place.

I mean, who wouldn’t want to approach this face? 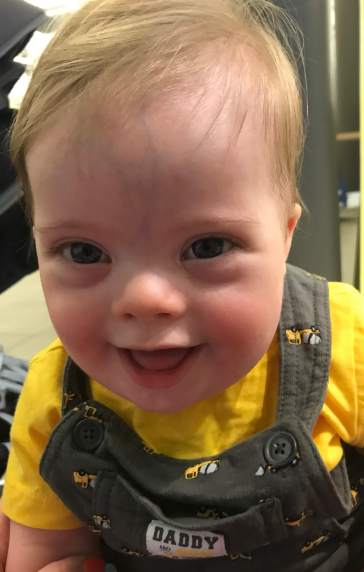 I didn’t stop and lecture him about special needs labels.  I didn’t stop and go on and on that it is not very nice to tell a new mom that their child will have a short life.  I didn’t tell him that his statistics were incorrect.  I just walked away.   It was all that I could do.

This conversation stuck with all of us, and we talked about it all the way home.  I wonder if that man did the same.

My desire to educate the public about people with different abilities as become stronger than ever.  Education is the tool that is going to change the way Nicholas sees the world, and the way that the world sees him.  Maybe better education in these areas can help prevent someone from saying something like this to him when he is old enough to understand.  Luckily, I can at least have this in mind and be mentally prepared in case that does happen.

My son is a boy with Down syndrome.

Fellow moms, I want to hear from you.  Has anything like this happened to you?  It seems like any time I bring Nicholas out in public I hear 100 amazing things and then that one bad thing.  Please share your story with me, and share my story with your mommy communities.  If you would like me to share your story on my blog, send me a message.  I’d love to help you make your voice heard.  The more people who can understand, the better off we will all be.

3 thoughts on “My son is a boy with Down syndrome, and your expectations are not his reality.”