When I returned to my job as a second grade teacher, I was not fully prepared to discuss Nicholas’s diagnosis yet.  I was so afraid that if someone brought it up, I would break down crying.  What would the kids think of their long-absent teacher then?

It wasn’t only that.  I had gone into labor on the first day of school.  My students have had a number of substitutes in the mean time, and I figured I would be walking into a total classroom management nightmare.  I was still nursing, so I had to navigate pumping, all while trying continue to be the rock star teacher that existed last year.

As World Down Syndrome day approached, I knew I had to tell my students.  I was afraid of what their reactions might be.  What if they said something hurtful?  What if they used the r-word?  I am good at controlling a conversation in a classroom in a way that keeps me unbiased usually, but this couldn’t be one of those times.

I went online and bought a couple of books to help me out.  This was one of them:

I read it, and it seemed pretty simple to understand.  I had also prepared a slideshow with a couple of facts about Down syndrome, explaining that it isn’t something you can “catch” and it doesn’t mean you have a disease.  It just means you were born a little different.  This is the picture I chose to introduce them to Nicholas: 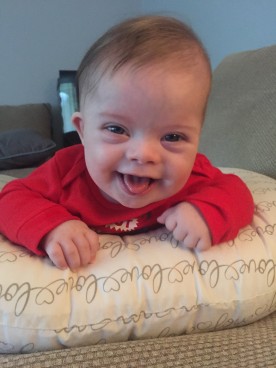 I told them that sometimes, it might take kids with Down syndrome  longer to learn to do things, like run fast, ride a bike, or read.  I used Nicholas as an example, saying that other babies his age are sitting up and supporting their heads, and he is not quite there yet.

Then, one student said something that started the most meaningful conversation around Down Syndrome that I could have never started on my own.

“I have Down syndrome.”

Of course, this student did not have Down syndrome, and he sometimes was a behavior problem in class.  I wasn’t sure whether he was truly confused, or he was just trying some attention-seeking behaviors.  I stayed quiet for about ten seconds, searching for a response.

“Because it takes me longer to do a lot of stuff.  Everyone in the class can read better than me.”

Then, it completely clicked in my head.  This is perfect, and I am going to run with it.

“This is a perfect example of how students with Down syndrome are more like you all than they are different.”

Then, another kid piped in.

“I can’t ride a bike yet, but all of the kids on my street can.  Do I have Down syndrome?”

At this point, I was getting a little teary-eyed.  It was as if they were explaining to me why everything was going to be okay. All of the kiddos in my class, who I was just getting to know, had the same difficulties that Nicholas might face.  This was a more profound moment in my life than those kids could have realized.  They became so interested in learning about Down syndrome that I had to get a lot more materials together.

On World Down Syndrome Day, I paired them up with students who I had noticed did not interact with each other very much.  I had them interview each other, and fill out a Venn diagram.  They then did a writing piece about how they are more alike than different from each other.  It was such a beautiful day.

I rediscovered my purpose as a teacher.  To show my students that differences in other people in our communities is a beautiful thing.  Nicholas is bringing that element to my students.  To this day, they constantly ask about him and beg to see pictures.  They don’t even realize what they have taught me, and that is the most beautiful thing about my job.

*Here is a link to the other book I bought.  It is a little more technical, and great for the kids who wanted more of an explanation of why DS occurs.  The book above is a link as well.

5 thoughts on “I have Down syndrome, too.”